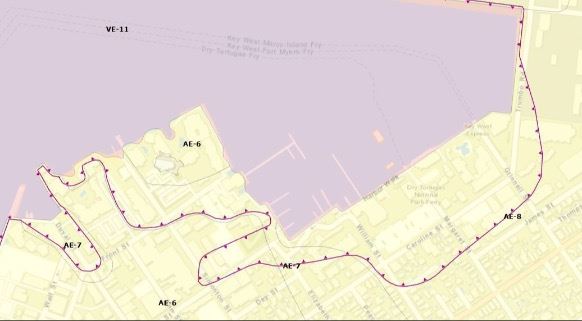 FEMA has drawn lines - such as the one shown above - on its new flood maps depicting Limit of Moderate Wave Action (LiMWA) boundaries.  Buildings touching this line and further seaward are considered within a "Coastal A" zone.

Buildings within these zones aren't expected to suffer a full onslaught of breaking waves from a storm surge, as would buildings closer to the coast, usually located in "VE" type flood zones.  However, waves of moderate height have been known to cause more severe damage than the simple static increase in flood levels.  It's these areas in which added flood protection is warranted.

Increased construction standards apply for projects within these areas.

"Coastal A" zones, also known as CAZs, don't affect flood insurance rates adversely.  However, CAZ construction requirements are applied within Key West under its participation with the Community Rating System (CRS).  Key West enjoys a Class 5 CRS rating with a 25% discount off most flood insurance policies.

FEMA produced a short video explaining the "Coastal A" zone.