How to Read Flood Maps

FEMA’s online paper maps are scanned images of the large paper maps it no longer prints for distribution. These maps are more difficult to read and don’t have the detail enjoyed with the digital version.

However, if you need an official printout showing flood zones for a specific area, you can print a FIRMette which is an official smaller area flood map for a location you select. This tutorial shows how to make a FIRMette online.

To understand flood maps, it’s helpful to know a couple of terms: 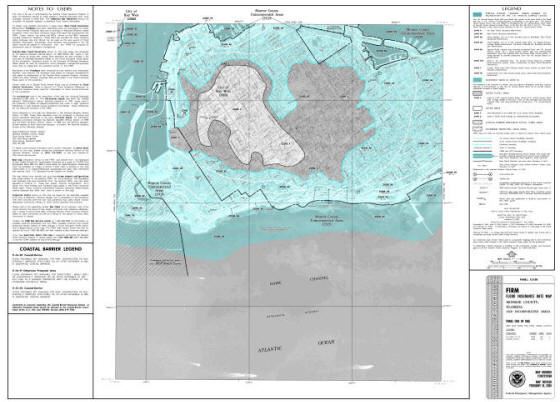 On the map the X-Zone is shaded  and labeled "0.02 PCT." X-Zones are areas where the elevation is higher than the minimum expected flood levels. Buildings in these zones aren’t 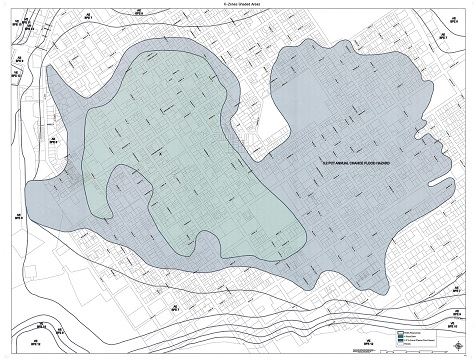 subject to enhanced building codes to prevent flood damage, yet flood insurance is available at a considerable discount.

The two shaded areas on the map show the only "X" and Shaded "X-Zones" within the city (except for Sunset Key).

In Key West, most buildings/lots are located within type "A" flood zones.  These are zones more inland from the coastline, where a static rise in water levels can be expected.

Land close to the shoreline is usually located in type "V" flood zones.  The "V" stands for "velocity," or breaking waves with a force that’s considerably more damaging. As a consequence, building standards are much higher within "V" zones.

Type "V" and "A" zones appear on flood maps as "AE-#" and "VE-#.  The "E" denotes this flood zone has an elevation level assigned to it, and is expressed as "AE-6" or "VE-9," with the trailing number indicating the Base Flood Elevation or BFE for that zone.  That BFE number notes the height above sea level flood waters can be expected to rise at a minimum.

The BFE is a reference height for building elevations and flood insurance.  A building below BFE is a building below the flood level for that site. Building codes require most new and Substantially Improved buildings be at a minimum height of BFE +1’.

The following images are examples of various flood map options for determining the flood zone for two buildings at the Wildlife facility at Indigenous Park near the White Street Pier.

Locate the property on the FEMA map.  If it’s clearly between any of the white flood 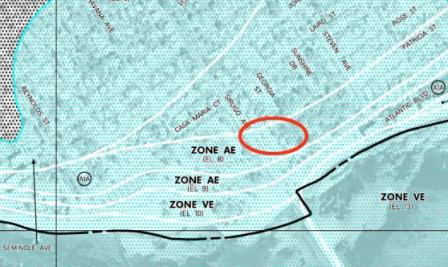 zone lines, then you now know what zone it’s in and the elevation requirements.

In this example, the property appears to be in an "AE" zone, with an eight-foot elevation requirement (EL 8).

When a structure is close to a flood zone line, it can be difficult to determine from the old paper FIRMs in which zone a structure is located.  When it’s a close call, use FEMA’s online digital flood maps. 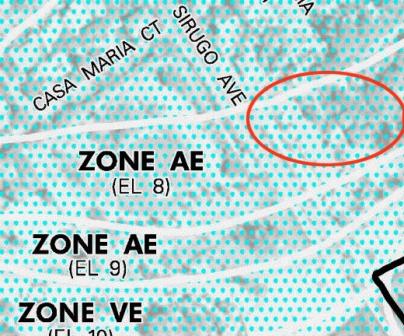 In the example it’s very hard to discern where specific structures are when you get close to the zone lines (red circle). If any portion of a structure (not the property lot) touches a flood zone dividing line, then the entire structure is considered to be in the zone with the most restrictive requirements or greater required elevation.

How to Read Aerial Images

The aerial photos of houses don’t appear until you zoom-in to the neighborhood level. So if 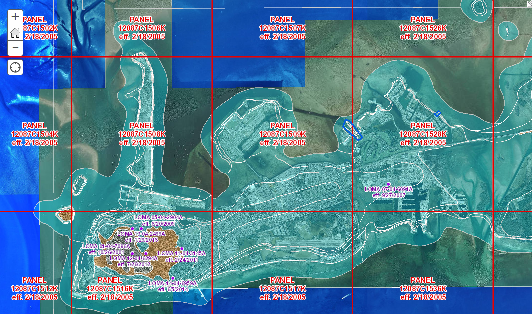 you’re not yet seeing the satellite view, keep zooming-in.

In this example, we can see a flood zone line (cyan colored) passes through the middle of one building (larger building in red circle).  However, it’s not clear if the flood line is actually touching the smaller building to the left. 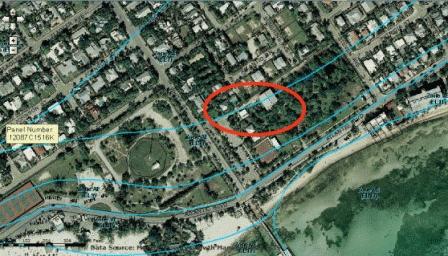 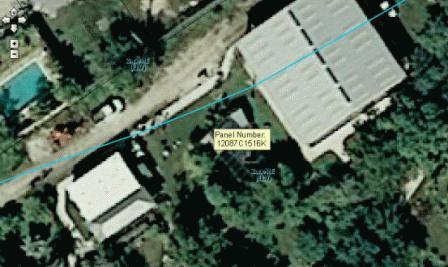 Both building are in the "AE-8" flood zone (below the light blue line), as opposed to the "AE-7" zone above the line.