In type "V" and "Coastal A" flood zones, enclosed areas below flood levels may be used to for minimal storage, parking and access to upper levels. However, these areas must have breakaway walls and flood vents. "V" zones are located along or near coastlines, where the "velocity" from breaking waves is considered most destructive, and where building codes have higher standards.

These breakaway walls must be designed and certified by an Engineer to certain pressure tolerances, so when violent waters hit these walls they break-away from the building. (V-Zone Certification form.)

Purpose of the Walls

Example of Proper Break Away Wall

If designed properly, the following photograph shows how a ground floor enclosure with breakaway walls would/should look after a ravaging storm. 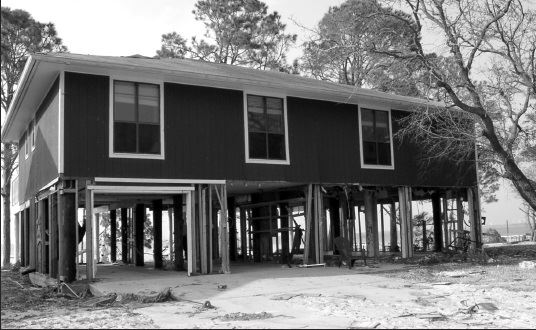 Example of Improper Break Away Wall

When this wall failed to break-away, the wave action was deflected upwards. The window was smashed and flood waters rushed inside. A large obstruction can be seen behind the wall, preventing it from breaking-away. Had it broken-away as designed, there likely wouldn’t have been any damage to the livable area of this building.

View All
/QuickLinks.aspx
Notify Me